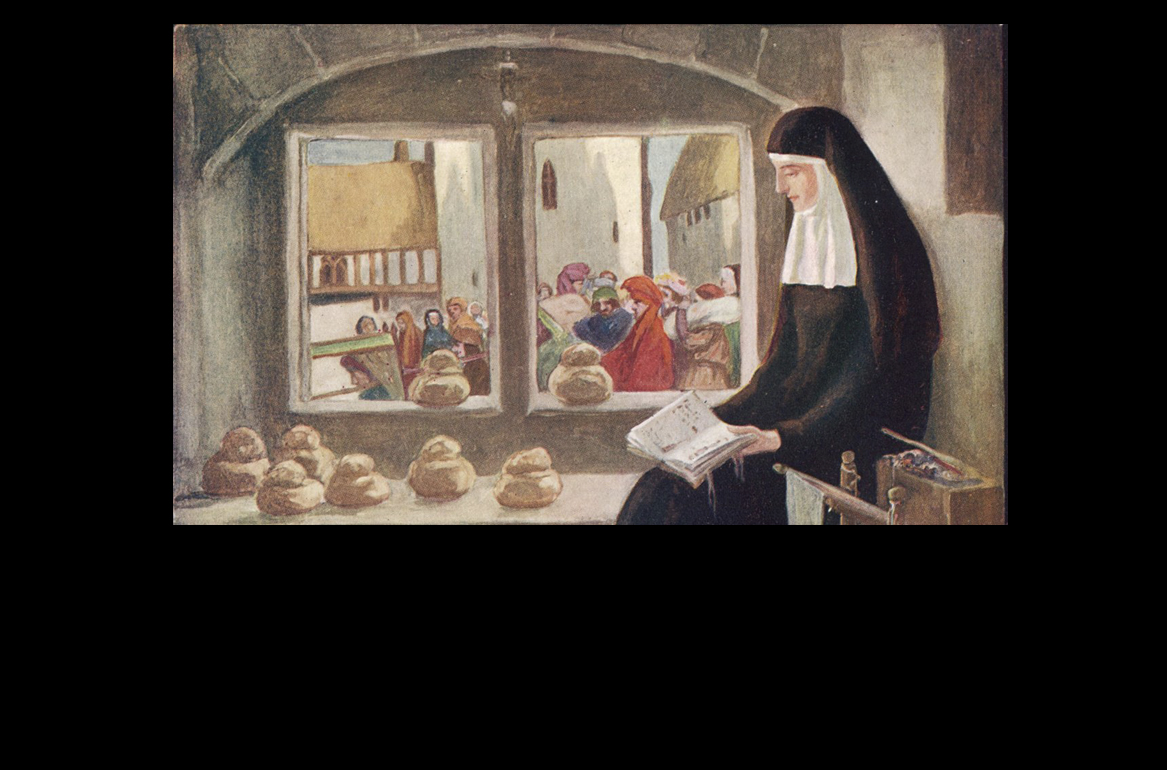 Julian of Norwich by Stephen Reid

Lezard, N. (2015, May 5). [Julian of Norwich by Stephen Reid]. Retrieved from https://www.theguardian.com/books/2015/may/05/revelations-of-divine-love-julian-of-norwich-review-religious-visions#img-1 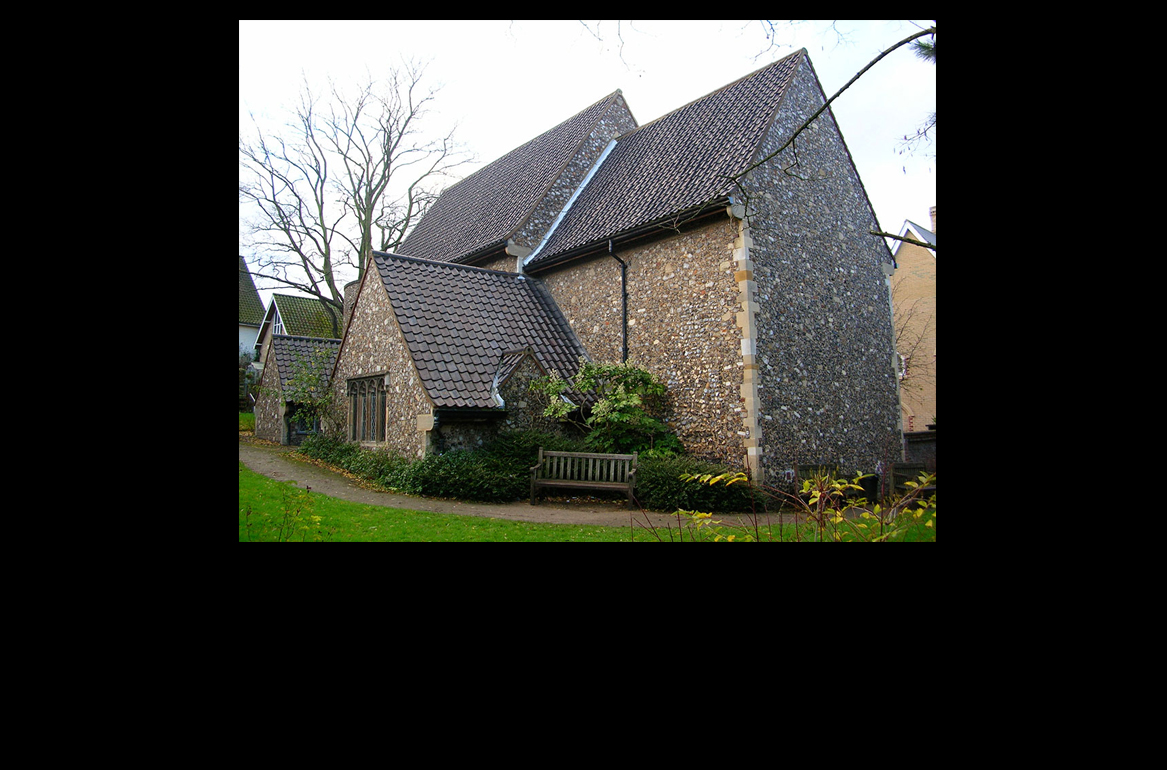 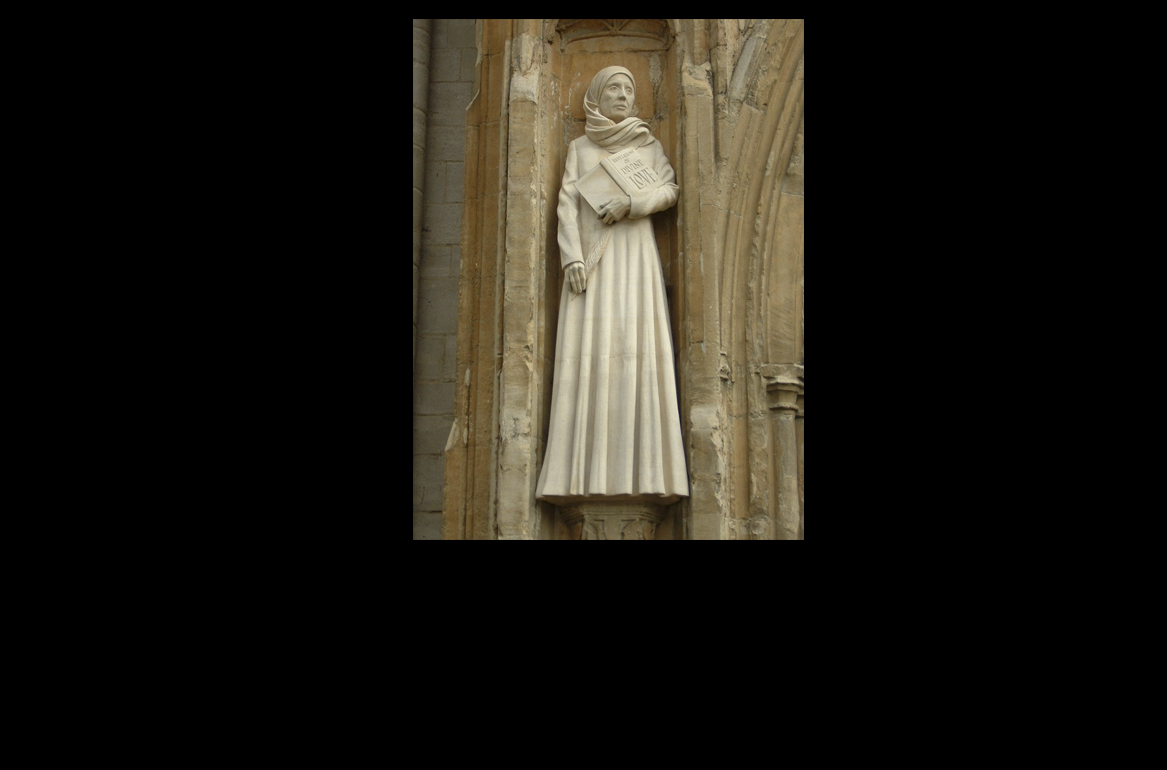 Statue of Julian of Norwich by David Holgate at Norwich Cathedral 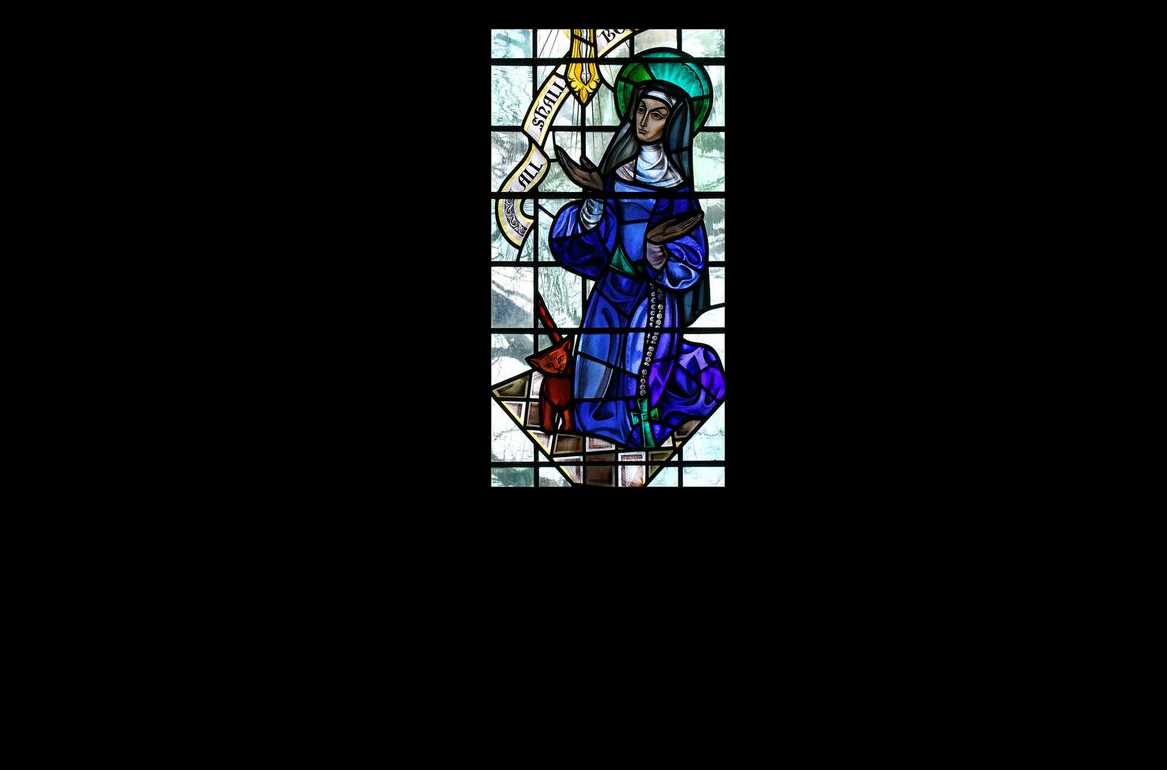 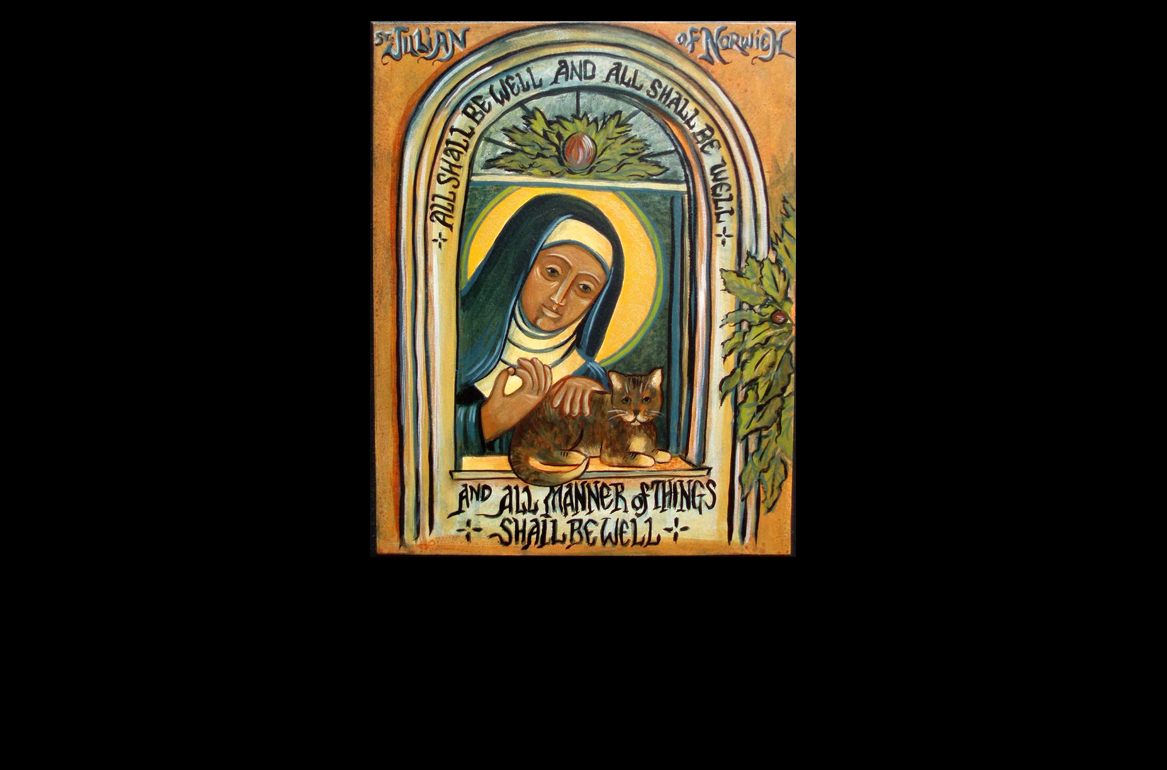 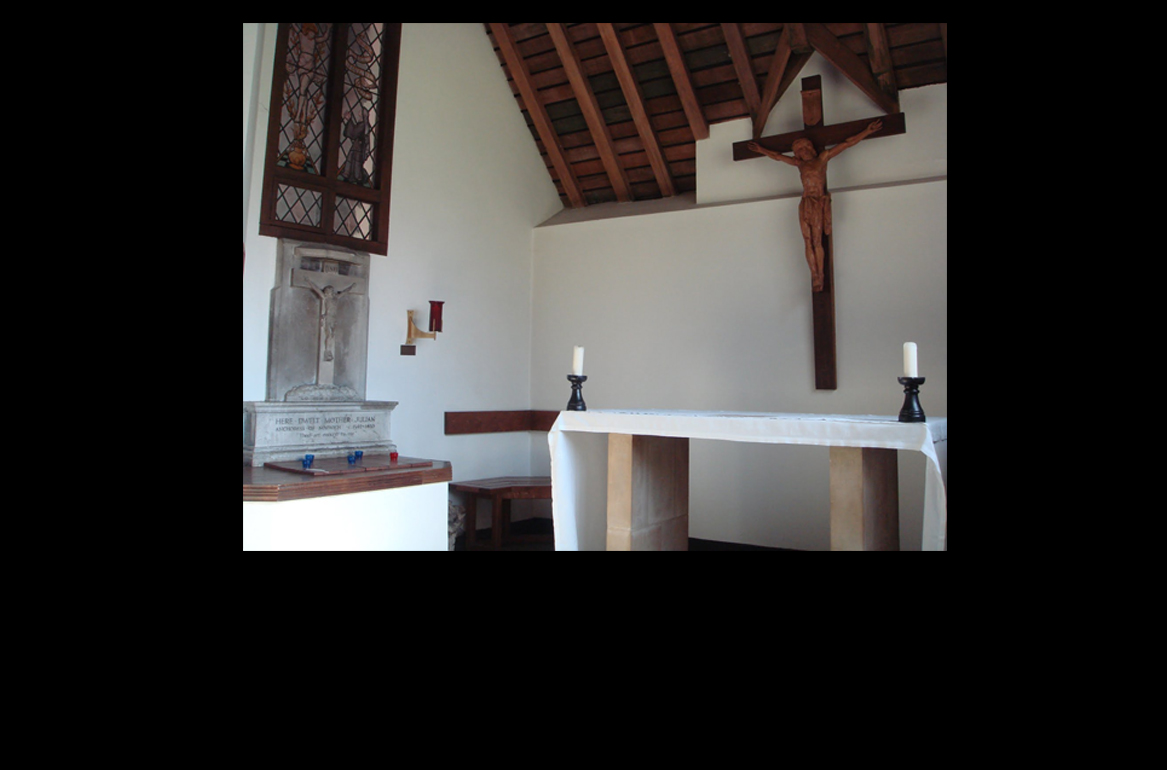 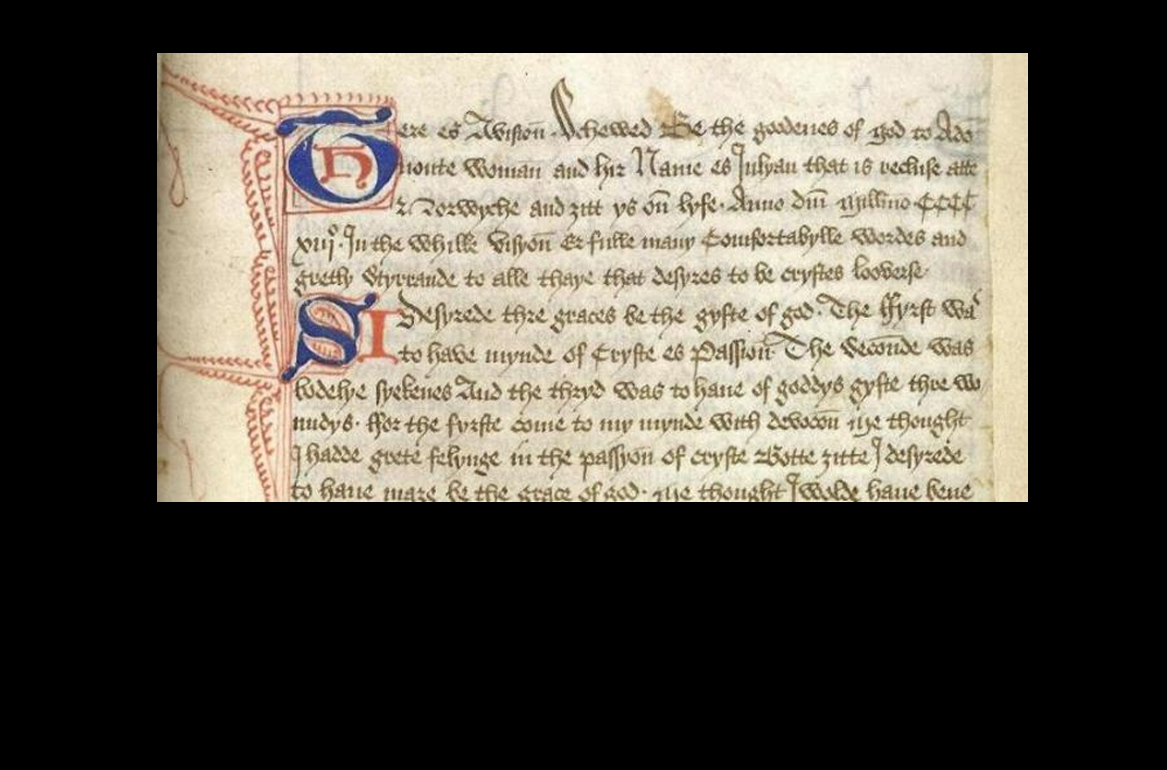 Section of the Amherst manuscript mentioning Julian of Norwich 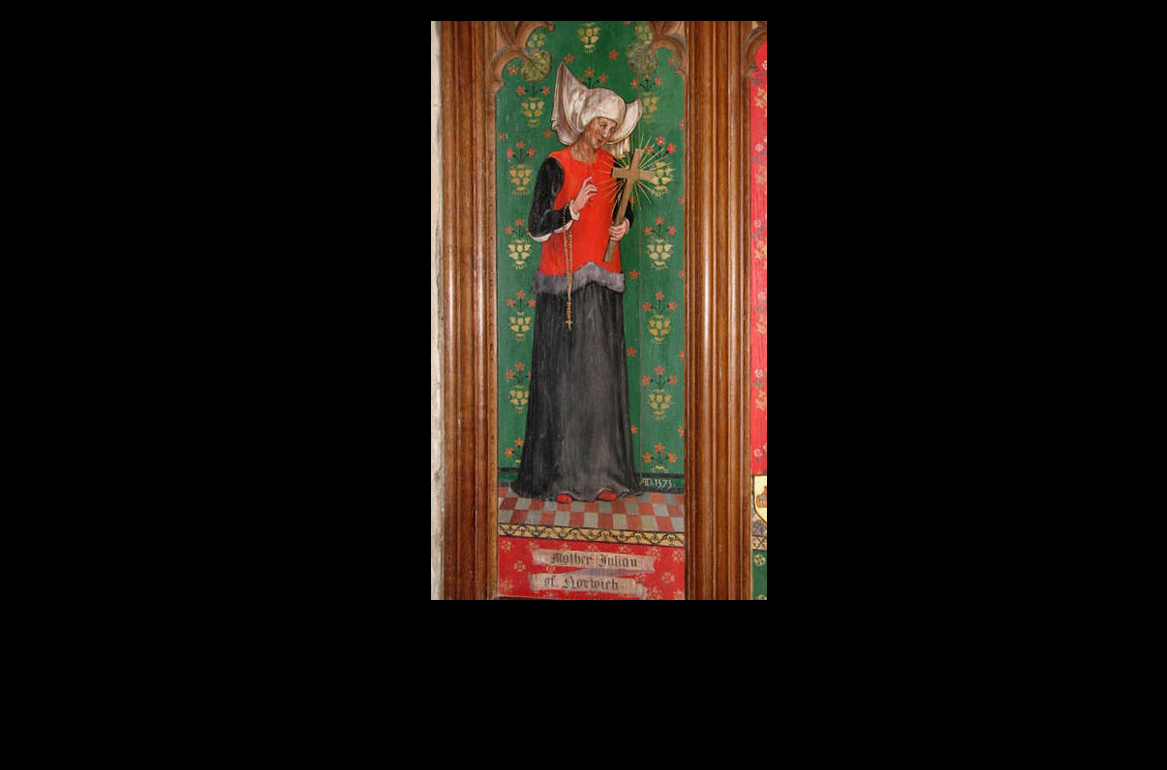 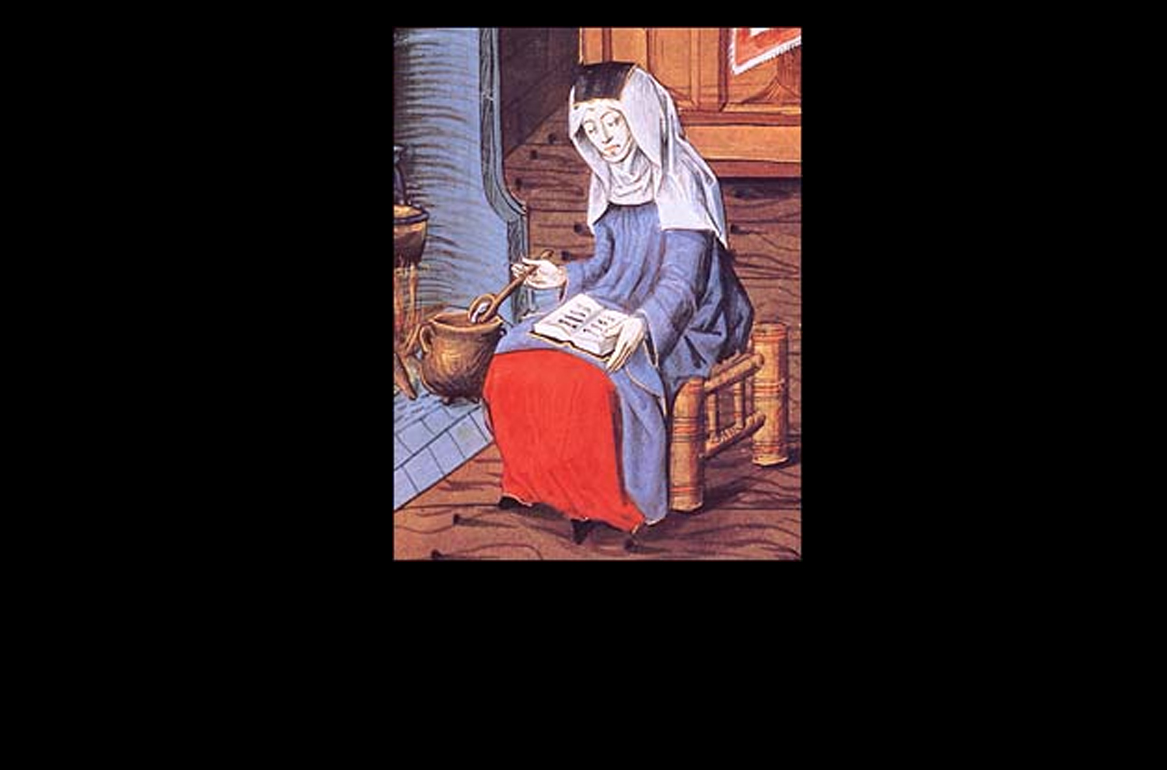 The medieval English mystic known as Julian of Norwich has left little evidence of her everyday life; in fact, even her name is unknown, and she probably assumed the name Julian from the church (St. Julian's) in Norwich, England, in which she chose to live in seclusion. Yet the autobiographical dimension of this contemporary of Geoffrey Chaucer is fundamental to her identity as a literary figure who describes the spiritual revelation she experienced in her thirty-first year. This revelation is the subject of a Middle English prose text, which exists in two distinct forms, a short version composed soon after the event, and a longer version written a number of years later. As Julian formulated her narration, she was aware that as a woman she was subject to criticism by those who disapproved of women teaching theology, so in order to clarify her purpose, she described certain incidental autobiographical details associated with her experience. These details consist mainly of the specific time at which her revelations occurred and of the persons present and the physical symptoms that preceded her experience. Yet the main autobiographical subject of her work is her description of the life-changing religious events, which, as she argues, justify and even require her narration.

Although very little is known about Julian's personal history, aside from what she relates of her revelations, much is known of the history of England in her day, and certainly the background of what historian Barbara W. Tuchman has called “the calamitous 14th century” is relevant. Since the Black Plague struck England in 1348 when Julian was a child, she was intensely familiar with the presence of widespread death, and two more great waves of the plague were to devastate the nation before she reached age thirty. Although she probably spent most of her adult life in religious seclusion, she could not have been entirely unaware that England was at war with France (the Hundred Years’ War, 1337–1453) throughout her lifetime. She would also have heard ominous rumors about political developments such as those associated with the mental decline of the aging King Edward III, the relatively early death of Edward's son the Black Prince, the accession to the throne of Edward's ten-year-old grandson Richard, and the turbulent events resulting from the power struggles that occupied the entire reign of Richard II. Though the bloody Peasants’ Revolt of 1381 occurred years after Julian's religious visions, the social tensions that were to lead to the revolt must have been building perceptibly during her early life.

Julian herself says nothing of contemporary events except insofar as her decision to flee the world reflects a rejection of them. For her, the definitive moment of her autobiography occurred when, in May 1373, having wished for illness and suffering in order to emulate Christ, she became severely ill and drew near to death. As she prepared to die, with her mother at her side, she experienced a sequence of “showings” (Middle English, “shewings”) or revelations accompanied by a kind of spiritual dialogue with Christ. In the course of the first fifteen showings, Julian's physical pain and weakness were relieved, and she awakened the next day much recovered but so confused about her intense experience that she told an attending priest that she had raved. She immediately realized, however, that her visions were more than mere raving, and, deeply ashamed of having spoken so carelessly, she fell asleep only to have a sixteenth revelation validating the first fifteen.

It was clear to Julian that the revelations made to her were divinely intended for her fellow Christians, so she duly recorded them despite her awareness that her motives might be misunderstood. She stipulates that she is not educated, which may only mean that she is not a Latin scholar, but she firmly if modestly maintains that her transmission of her spiritual experiences is a fulfillment of divine will.

Another remarkable feature of the autobiographical aspect of Julian's writings is that the two versions of the Showings orRevelations of Divine Love are separated in time by nearly twenty years. The effect of this interval indicates two things. First, Julian remained devoted to the truths revealed to her and meditated at length on them for many years. Also, she developed over time a more elaborate sense of the implications of her visions. For example, one famous passage in the long text (Chapter 60) discusses Christ as mother, explaining that the nature, intensity, and comfort of Christ's love are those of a mother.

Although Julian became an anchorite or religious recluse (probably after her revelations), she did enjoy a certain local fame, since some of the few facts we have about her life include records of money left to her in wills, and the writings of Margery Kempe document a visit to her at Norwich. Yet, in the turbulence of the fourteenth and fifteenth centuries her existence was never known outside of her small community, and with the English Reformation of the sixteenth century, the traditional establishments and often the documents of the Roman Church were widely destroyed. It was in the seventeenth century that a few surviving manuscripts of Julian's Showings began to appear, and the first printed version of the work (the long version) was published by Serenus Cressy in 1670, which was titled XVI Revelations of Divine Love. Shewed to a Devout Servant of our Lord, called Mother Juliana, An Anchorete of Norwich.

Julian of Norwich had little influence on literature until the twentieth century, but, as her works became better known during that period, interest in them grew, and her writing began to receive recognition from such distinguished figures as T. S. Eliot, who alludes to her in his poetry. In an age that celebrated individualism, it was finally possible to acknowledge the quiet but monumental individualism of a medieval anchorite.